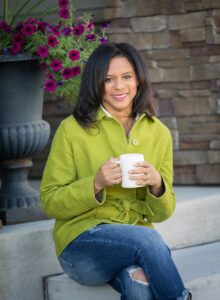 Topic: Unmasking CRT: What It Is and What We Can Do About It
Speaker: Sheila Qualls

Sheila Qualls is the Executive Director of TakeCharge. TakeCharge strives to unite Americans regardless of background toward a shared history and a common set of beliefs based on the notion that the promise of American works for everyone, regardless of race or social standing.

Prior to leading TakeCharge, Sheila was a national speaker on the topic of marriage and families. She was also a blogger and personal coach. Sheila blogged at Patheos.com as “The Not So Excellent Wife.”  Her work has also appeared in the Upper Room, the MOPS blog, Grown and Flown and the Minneapolis Star Tribune.

Sheila has a unique vantage point to discuss the topic of racism in America. Her father was born in Memphis, Tennessee, in 1929 making her one generation removed from the Jim Crow South.

She earned dual bachelor’s degrees in English and Journalism and a Masters of Arts in Communication.

She has been married for 35 years and has five children. She’s birthed four babies, adopted one, survived 10 corporate moves, 20 years of home schooling, and two dogs and a ferret. (May they rest in peace.) She and her husband, Kendall, live in Medina with their Black Lab, Largo.