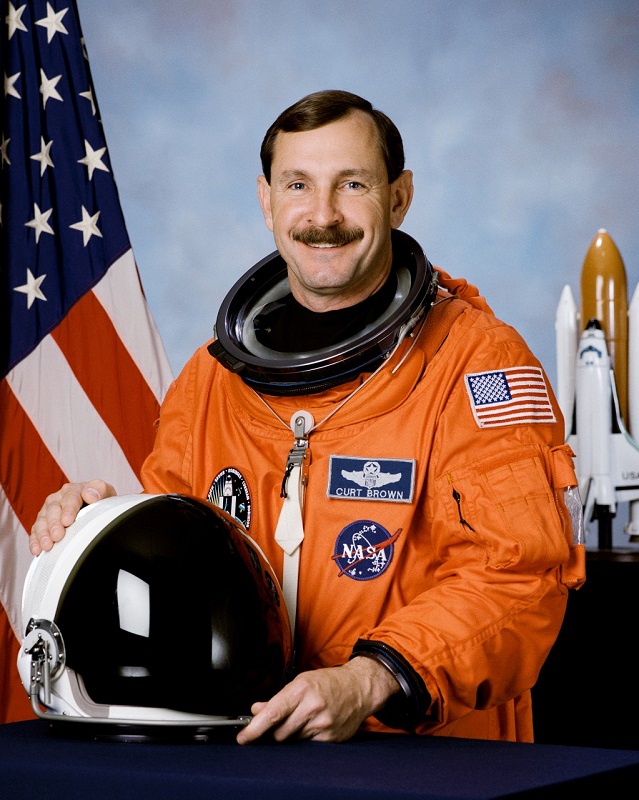 Curt Brown grew up in Elizabethtown, North Carolina and received a Bachelor of Science degree in Electrical Engineering from the United States Air Force Academy class of 1978. He went on to Pilot Training at Laughlin AFB in Del Rio, Texas. He completed Fighter Weapons School at Nellis AFB and instructed in the A-10 until he was selected for the USAF Test Pilot School at Edwards AFB. He went on to serve as a test pilot  at Eglin AFB, Florida until he was selected as a NASA astronaut. He flew six shuttle missions into space, including the mission that returned John Glenn to space and repaired the Hubble Space Telescope. The shuttle mission with John Glenn was a highlight of a career that landed him in the U.S. Astronaut Hall of Fame.  He has over 6,000 hours of flight time in jet aircraft and 1383 hours in space. Imagine all those frequent flyer miles he racked up.

“When you’re up in orbit and you look down on your country … you don’t see any big borders. Everything looks so peaceful from orbit, so quiet. It makes you realize you’re small in the big scheme of things. There are a lot of things in this universe that are happening that we know nothing about.”

Curt lives with his wife, Mary in Hudson, WI since 2002. He recently retired from Sun Country Airlines in the Twin Cities.

Registration for this event closes on November 10 at 9:00 p.m.